Private Eye Harriet Holmes continues to investigate the charismatic Congressman Jack Vindle. Her client, wealthy socialite Muffy Danvers, believes Vindle is having communications outside of the public schedule and she wants to know what they are. Holmes attempts to unlock the mystery that includes discovering the motives of her client.

This series features the original music by Robert C. Fullerton who composed and performed the Harriet Holmes theme.  Musician Robert C Fullerton also acts as Mr. Pierce in our story.

This story is a departure from the usual parody story we often share, it is a darker story and has elements of the Raymond Chandler/Dashiell Hammet school of detective/noir thrillers. With Nutmeg Junction, we celebrate the world of Old Time Radio (audio theater) and there are a plethora of genres that entertained the listening audience. We’ve focused on the comedic aspects of the medium but we can do stories of all varieties and we decided to flex our dramatic muscles with this three part story.

The story was intended to be shared in four or five segments but when our lead actor Nick Bourne had an opportunity to head to the Big Apple, we decided to put the entire story in three episodes. This is why this particular story is only 20 minutes (and we added “Thoughts before Brunch” as a bonus to the episode, but the final chapter (chapter 3) will be the full 30 minutes. 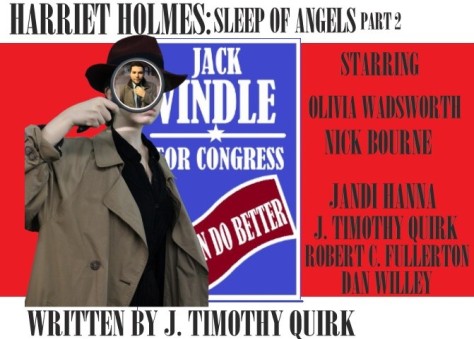