Daphne’s Inferno was a script I had written in the early months of the program but found a home during the month of Halloween. The story was my take on Dante’s Inferno.

There’s a lot of foreshadowing in the piece-the “That was a HELL of a thing to do”…the fact they didn’t have good reception in the station, etc..lots of pieces in the beginning that set up the story that follows.

I think the script has the potential to be reworked at some point to bring some foreshadowing in about who Carl is (or his part in the story) but Dante’s Inferno itself is an allegory with tangents and explorations etc and so my piece doesn’t require more than what I wrote but someone down the road may decide that it might work in a different way and that’s understandable.

I sent the script out to the cast to see if there was interest in recording it and there was, so we set about the rehearsal and recording time. Originally I had the character of Carl and Drew being acted by the same person but it works better separate and Dan Willey was outstanding as “Drew” (T’sup, Drew). 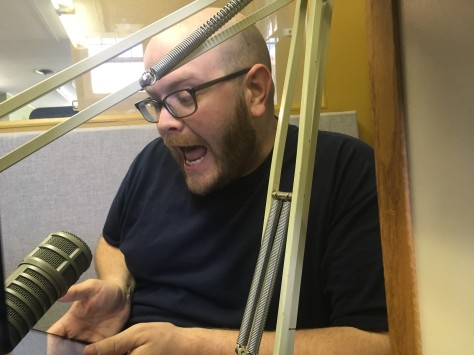 Josh Newey plays both Virgil and the Corpse Conductor and it’s a real tour de force!  What’s even cooler is that Josh wanted to write the intro for the story as The Corpse Conductor, which was fantastic. Josh is an amazing cast member for Nutmeg Junction, taking on role after role with positive energy and voices that serve the characters in surprising and wondrous ways. And it should be noted that on our show many of our actors have a character (or two) that’s their recurring headlining role, and the Corpse Conductor is definitely a recurring role that’s all Josh’s.

This episode  marks a great turning point for the series because many on our team are now working on writing scripts or portions of scripts. Now it should be noted the first co-writing experience was in Doctor Keen and the Phenomenal Fifty in The Wizard of Gallows Hill where Lana Peck’s father wrote the story initially and Lana and I re-imagined it for our show. This is the first time a cast member penned their portion completely of the story start to finish and with one minor point, their script was the complete version that was recorded. There’s more of that to come!

WAS WRITTEN BY J. TIMOTHY QUIRK AND JOSH NEWEY

LANA PECK AS THE BECCA/THE DEVIL