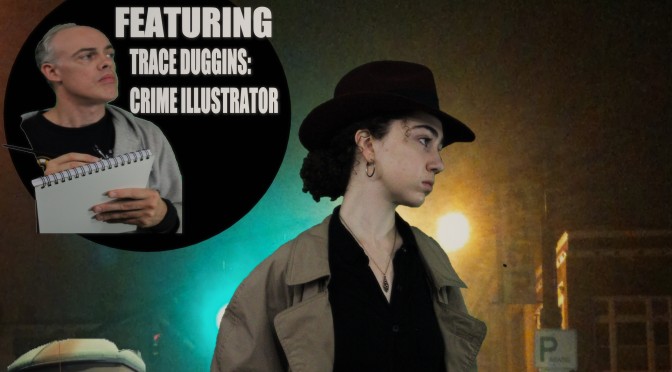 Intrepid private eye Harriet Holmes meets an iconic detective duo to conclude her search for the Lost Episode of Nutmeg Junction. She locates the story of Trace Duggins: Crime Illustrator in a send-up to the golden age of radio. 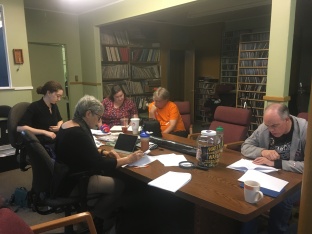 There used to be an old time radio program called Casey: Crime Photographer which was nothing more than a detective show with the protagonist who was a photographer for a newspaper.  When creating a parody of that show, Kurt Moffett, who is himself a reporter for a newspaper as well as an integral part of the WAPJ radio station family, was tapped to play the lead.

That being said didn’t want to do a photographer and thought a crime “illustrator” had more appeal especially as the character to wax philosophically about the art choices and bake in to the story line a specific reason why the perpetrator would be caught through art. Since I wasn’t going to use “case-y” and thought Trace would be a great name for an artist.

Occasionally we’ll leave some moments of behind the scenes humor/reactions in the show itself. We do that at the very end of the episode courtesy of Rich Cyr!

The Trace Duggins story line is introduced as part of the Harriet Holmes mythology, or rather trilogy for this is the third and probably final part of the “Search for the Lost Episode” saga. To be sure, we’ll have Harriet Holmes in many more adventures but we’ve done three “lost episodes” shows and as it says in the script, three is a magic number. Olivia Wadsworth is wonderful in the role and her monologues have some of the better one-liners.

I’m excited that the show reintroduces Netta and Nathaniel Chance, our tip of the hat to the Thin Man series, and I absolutely love the way Lana Peck and Kurt Boucher channel the iconic era. These characters were recorded on our very first recording day (ever) of Nutmeg Junction and they deserve some more adventures! 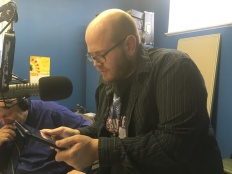 The location of the Harriet Holmes section is in Broughton’s Meadow which was the original name for Florence, Massachusetts area in the Pioneer Valley. Their library is Lilly Library and the iconic and wonderful public park is Look Park. See if you can hear the references to these locations!

Also there are a few shout outs to Leominster Massachusetts! The show is heading to Leominster’s WLPZ on October 20th!

We continue our new way of creating Episode art-with photos taken via Kurt Boucher and myself (not sure who took which photos but it was a collaborative effort on the team). Jandi Hanna located a magnifying glass which we used during the photo shoot and in future episode covers it will probably be seen!

WAS WRITTEN AND DIRECTED BY J. TIMOTHY QUIRK (C)2018

MELISSA GABEHART AS STRANGER ON A TRAIN/MAUDE PATTERSON

JANDI HANNA AS ROBYN THE REPORTER/LIBRARIAN

RICH CYR AS THE BUTLER CHADWICK