In this episode we have an extraordinarily fun, all-star cast performance of The League of (slightly) Super Villains. The legion of less than stellar super villains meet at an abandoned discount sushi restaurant in a strip mall and plot their most “heinous future” together. For inspiration they reach out to the criminal mastermind “BRAINABLE”. The villains are Dr. Twomley and Ox (from the Grey Whisper Episode 4), The Storm Drain, Stinging Nettle, Mister Minutia, The Laffer, Poet Master and The Computator. The episode stars Lana Peck, Kurt Boucher,, Danny Cook, Brianna Dobranksy, Robert C. Fullerton, KJ Johansen, Jonanna Rapoza, June Robideau, Jeff Savage and Olivia Wadsworth The episode was directed by Lana Peck and rehearsed and recorded at WAPJ studio in Torrington, CT. 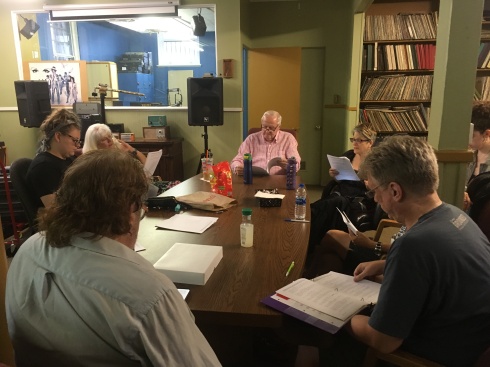 SHOW NOTES
This episode marks the directorial debut of Lana Peck who is an original cast member and who stars in the episode as Dr. Twomley. As we had a number of performers new to audio theater, Peck’s guiding hand was essential to this successful show. 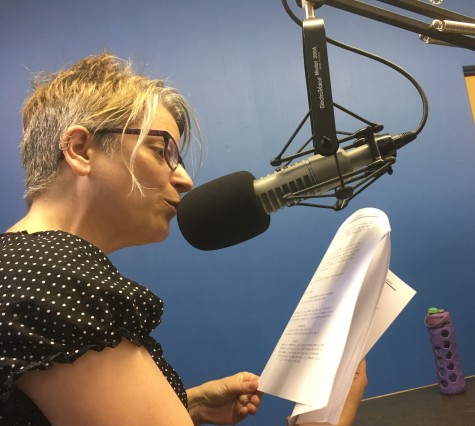 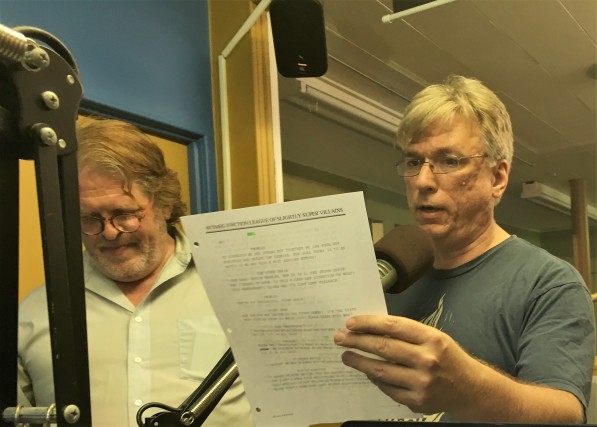 Lana Peck’s “Dr. Twomley” and Kurt Boucher “Ox” return after being the villains in Episode 4 of Nutmeg Junction (The Grey Whisper).  This was a wonderful way to return these very fun characters to the show. 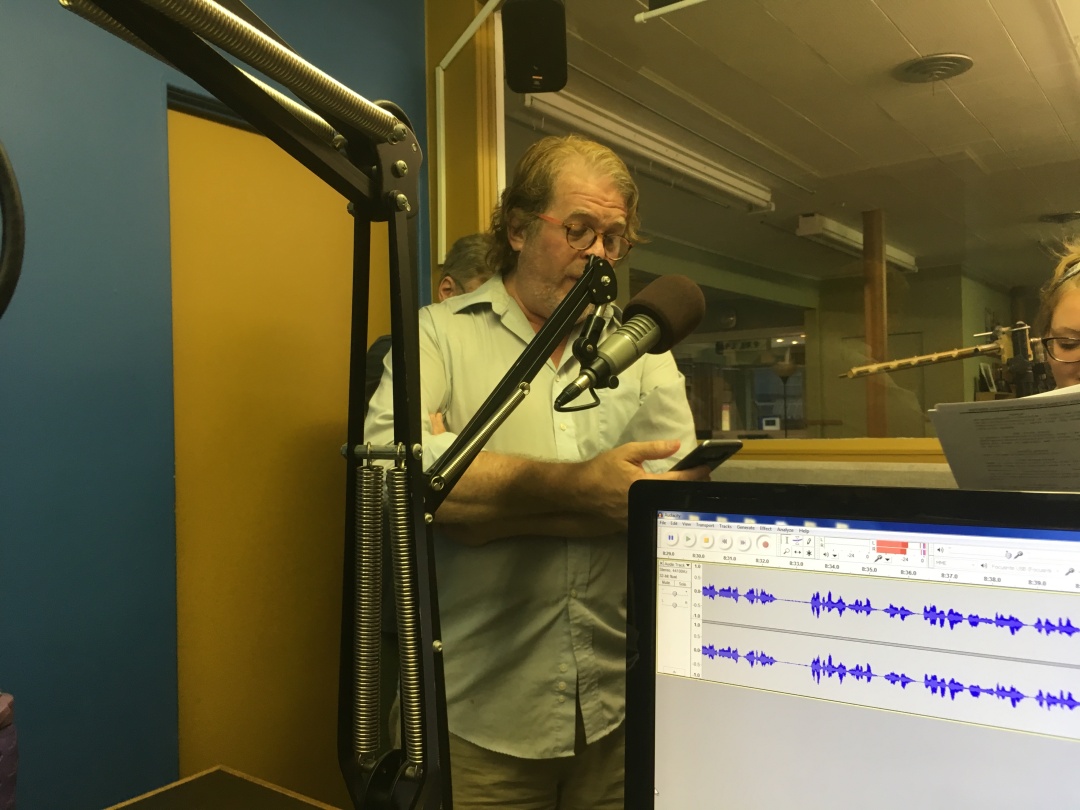 Robert C. Fullerton also returns in a dual role. I spotted Robert outside Sasso’s Pizza in Torrington during a summer afternoon and I pitched him the role and he was on board. Fullerton is Nutmeg Junction’s musical inspiration; he wrote the theme song and the end credits song.  But what may not be as well known is Robert does incredible vocal work. I performed with him in a staged reading of “Twelve Angry Jurors” (Note: Conrad Sienkiewicz directed that and Jandi Hanna was the producer of the show!) and at that time he did a wonderful accent for his character.  During Nutmeg Junction he shines when he’s allowed to perform characters. His signature role was Tex Bijou: Cinema’s Singing Cowboy. During the episode, we hear Tex Bijou in the background (another call back to a prior episode!) Fullerton performs Mr. Minutiae and his musical fans would never know it was him were it not for the credits! Had we more time I would have had the idea of extra long receipts of useless information come from Mr. Minutiae. 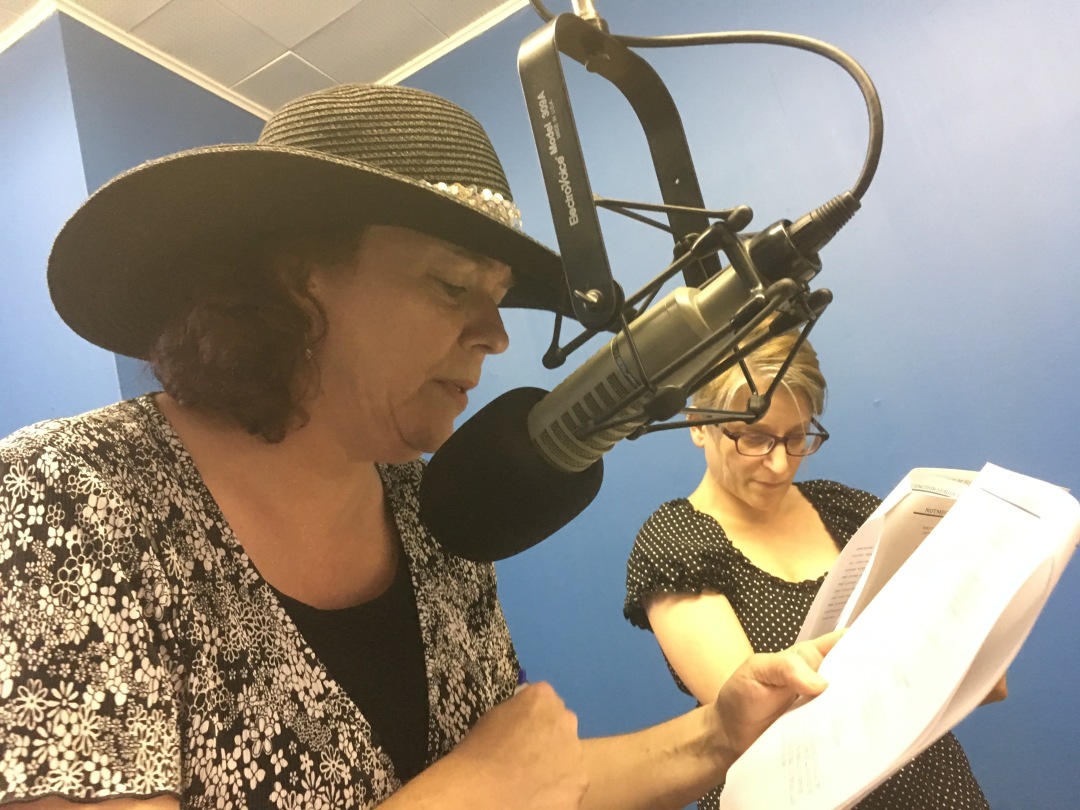 We enjoyed major representation from our friends at the KBJB Internet Radio network! My great friend KJ Johansen returned for an acting role (she had been interviewed in a prior episode and performed as “Ginny Wyles” in SeredipHistory Part two). Here she portrays “The Poet Master” which is my interpretation of The Riddler but I thought it would be funny if the character wasn’t all that great at rhyming!  There’s a nod to the Sugar Hill gang in a line that was cut. Despite the character’s purposeful lackluster phrasing, the character eventually says one particular thing that everyone appreciates. 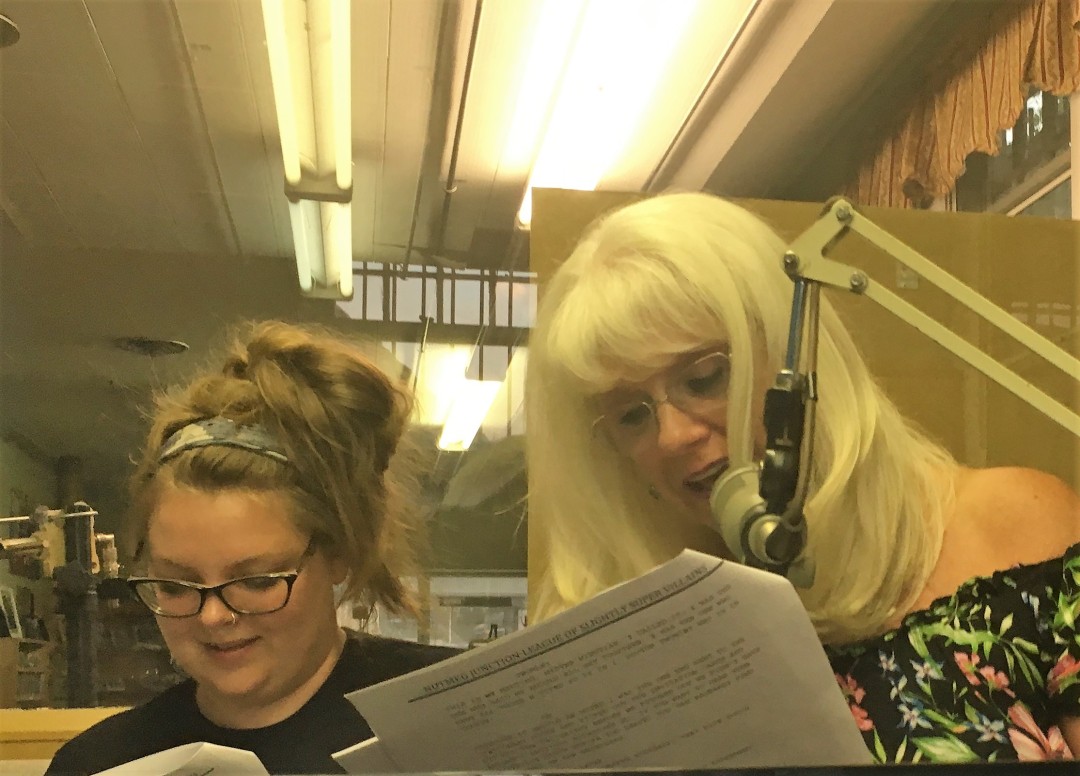 June Robideau (a cohost of The Warped View on KBJB) portays the Computator! Now June had worked on the voice prior to the rehearsal and then tried it out on the day of rehearsal/recording and it worked marvelously. The Computator pays homage to all the really poorly conceived Batman villains like Calendar Man, Signal Man, Condiment King, Kite Man, Mr. Polka Dot, etc. In other words, the creators picked a noun and then anthropomorphize-d it. I loved the idea of a villain whose sole weapon is a store bought computer with 8 mb of RAM. 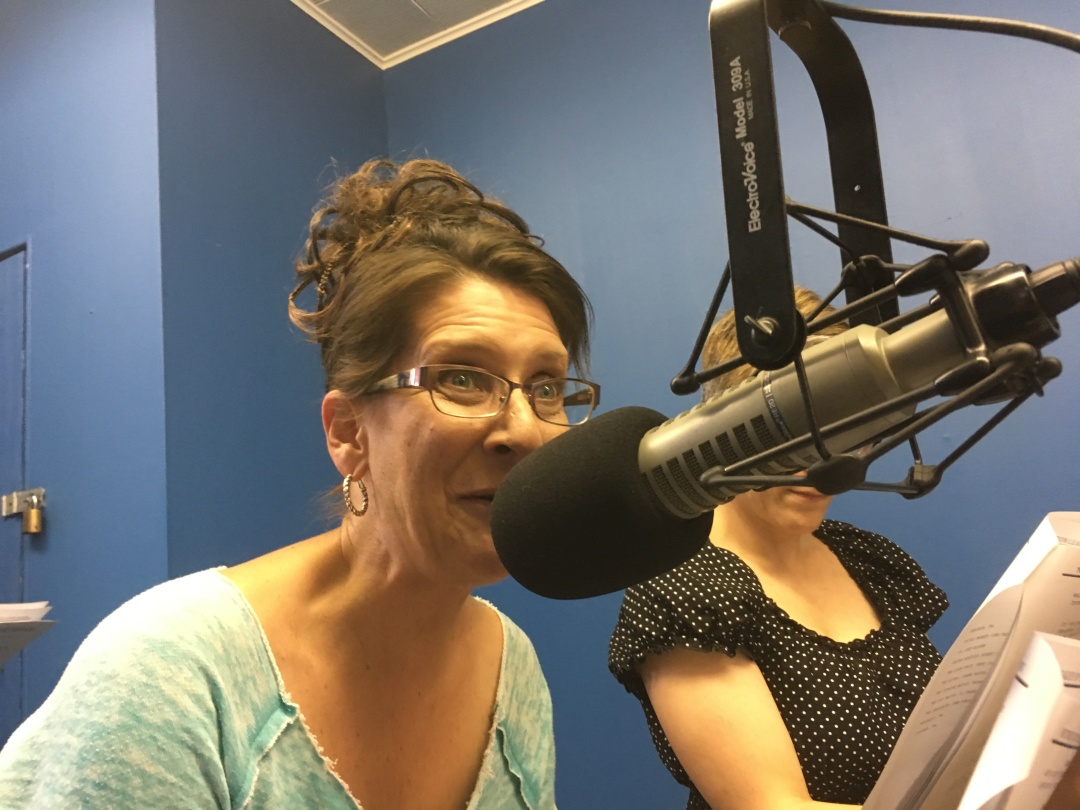 Joanna Rapoza is also from KBJB. A comedienne, she co-hosts :You Can Not Be Serious” which discusses comedy with up and coming and established comedians with KJ Johansen on the KBJB network. So I envisioned her with a “Joker” style method of operations called “The Laffer” but one who is repeatedly annoyed by having everyone asking to hear her laugh. The laugh at the end of the episode is a marvel to behold in the auditory sense! 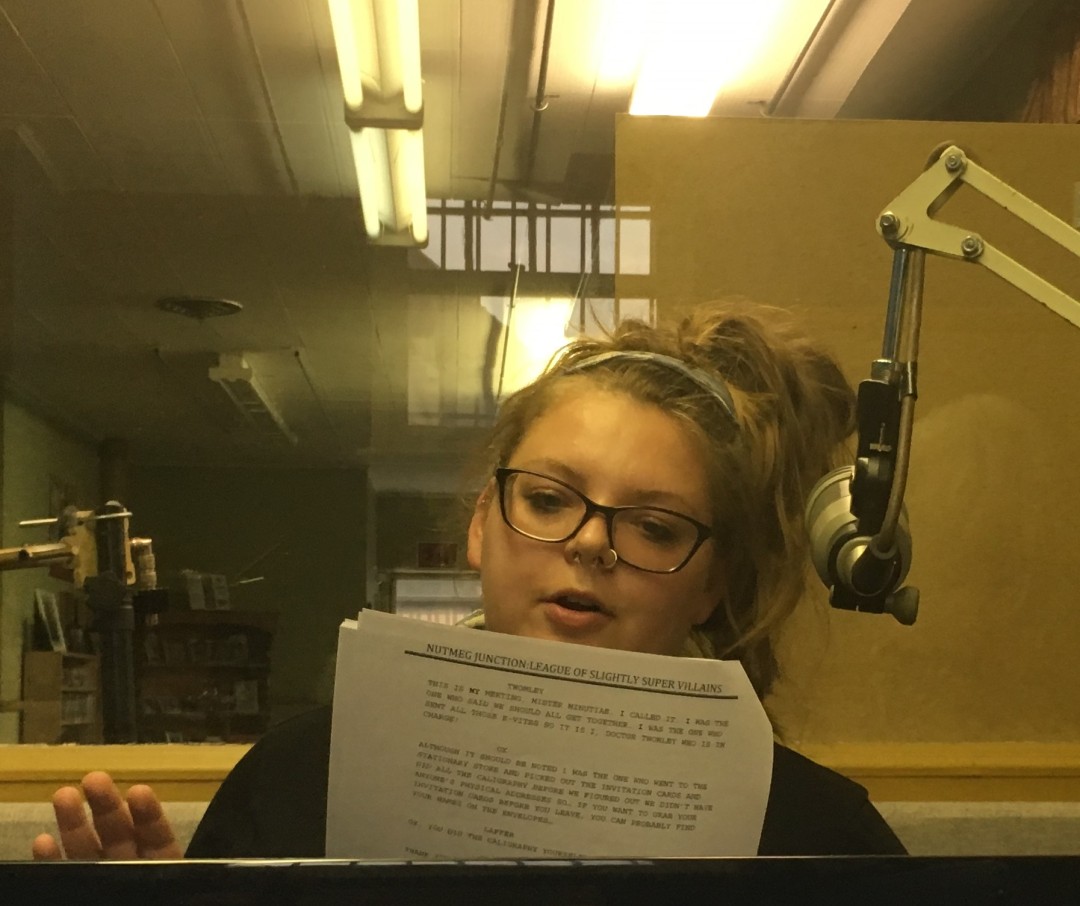 Brianna Dobranksy is new to the world of audio theater but her work as Stinging Nettle was fun and enjoyable. The character is based loosely off of Poison Ivy but instead of being Poison, Stinging Nettle just irritates people and is herself slightly irritated with all of the proceedings around her, which is why in the final act when someone orders “Stinging Nettle Hot Sauce”, Stinging Nettle is finally able to be pleased. 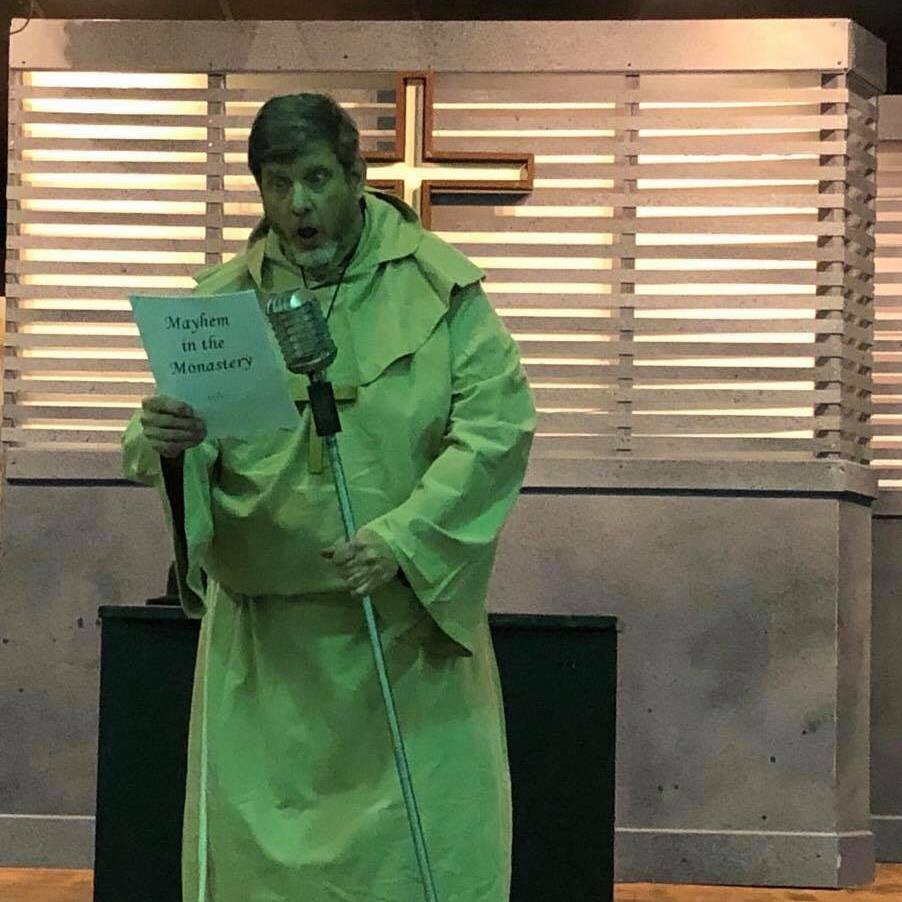 Danny Cook is our first “remote actor” as he hails from Georgia. See the Meet the Cast post for more information. I recorded his lines with the cast during the time of the original recording. Cook sent his work in separately and was seamlessly edited in. The success of this episode means we’ll be able to do more work with Danny Cook in the future! 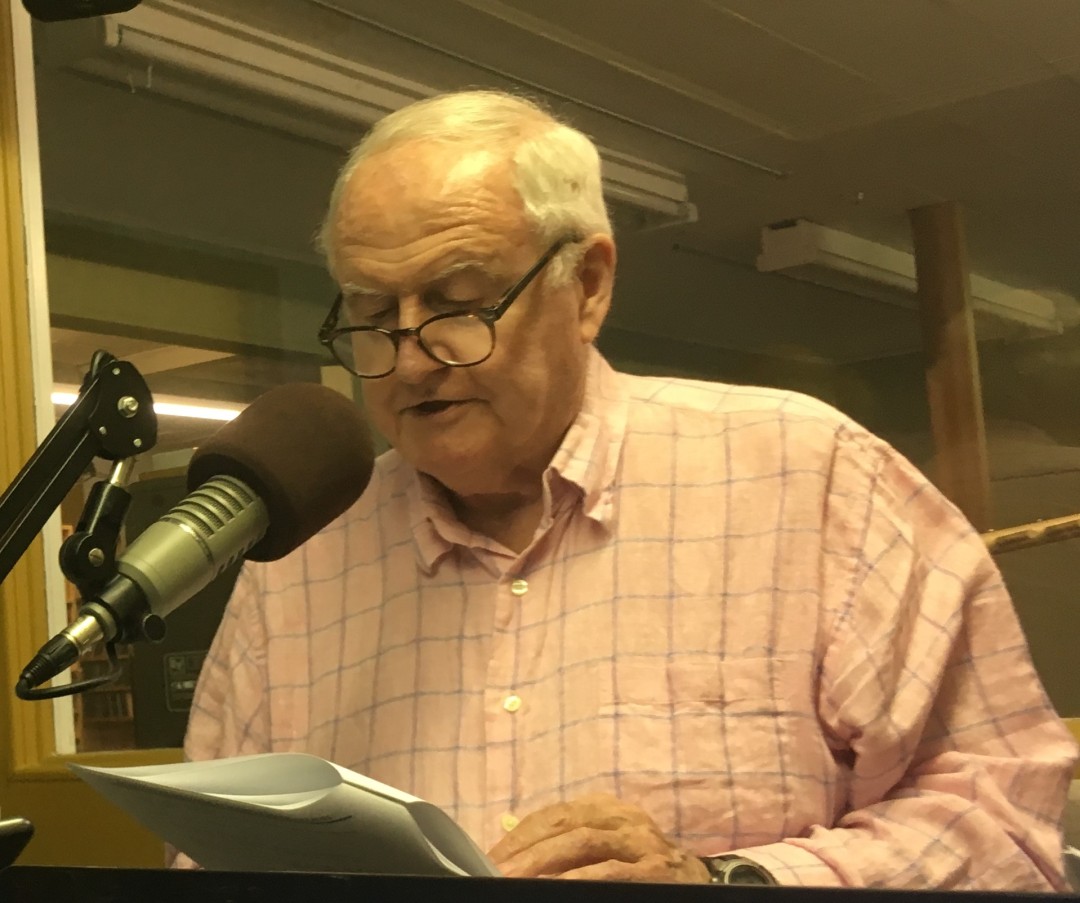 I had wanted to work with Jeff Savage for some time. We intend to do a show dedicated to featuring his voice and then doing an interview about his work on the movie “Chappaquiddick” (hopefully that will happen in August  for a September release). When the opportunity for Brainable came up, Savage worked his schedule so that he could do acting work in New Haven during the day and then drove up to Torrington and rehearsed/recorded the Brainable character that evening.  The success of the idea of why super villains are going “legal” rests on Savage’s performance. 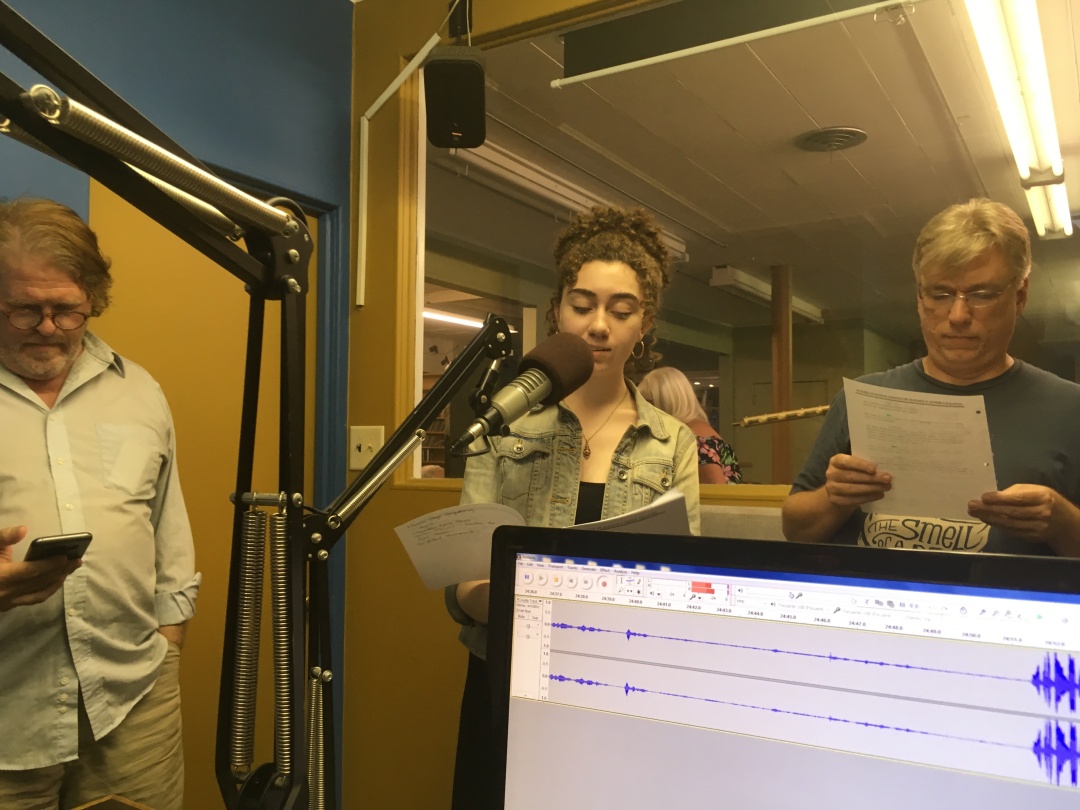 Once again, Olivia Wadsworth came in and helped us with the customer role but she performed a larger role during rehearsal when it was unclear whether one of the actors could make it.

As for me, I did my best “Ted Knight” impression ala Super Friends for the introduction. My daughter liked the idea of the abandoned discount sushi restaurant concept so I knew we had a good backdrop for the story. 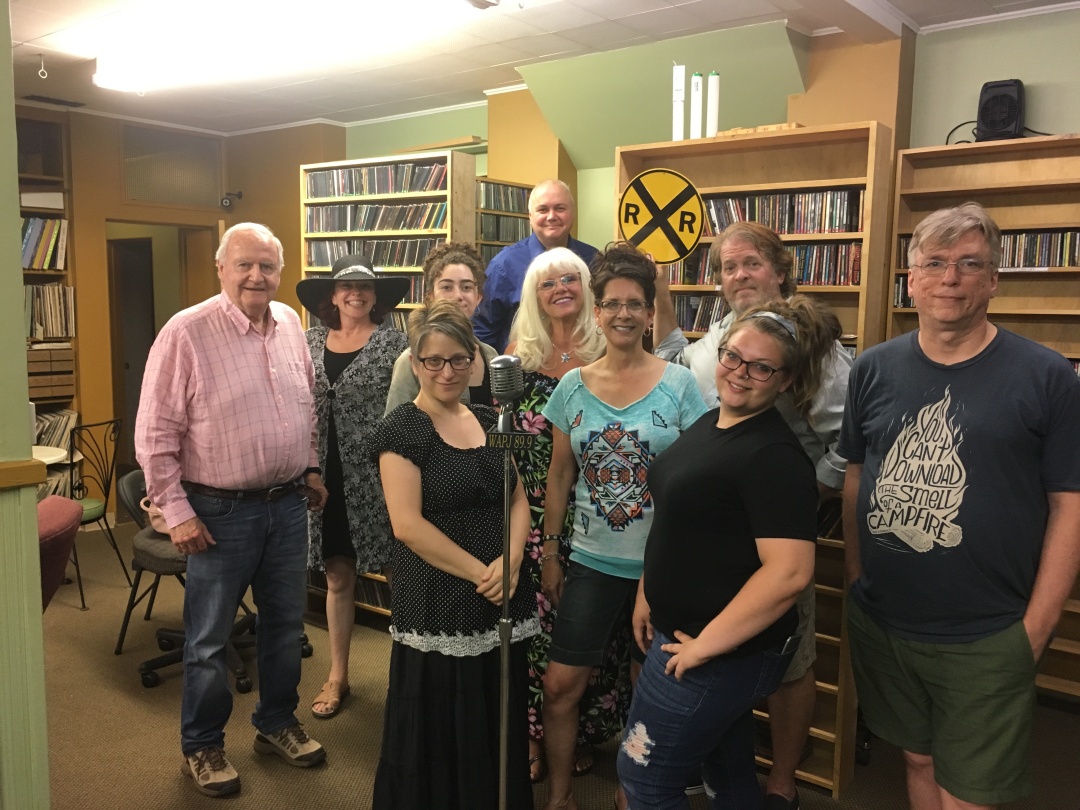 DANNY COOK AS THE STORM DRAIN

KJ JOHANSEN AS THE POET MASTER

JOANNA RAPOZA AS THE LAFFER

JUNE ROBIDEAU AS THE COMPUTATOR

OLIVIA WADSWORTH AS THE CUSTOMER