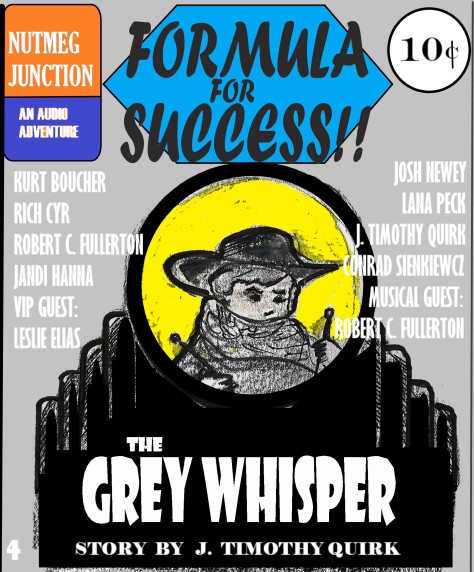 In this episode we meet Nutmeg Junction trolley line’s Quality Reviewer Kent Flashman as Ella becomes Lead Conductor for the first time.  We enjoy music from Robert C. Fullerton and meet VIP guest Leslie Elias of The Grumbling Gryphons Traveling Children’s Theatre group.  In our passenger story we introduce The Grey Whisper who is a master of disguise, fighter of crime and a wonderful knitter!

The Grey Whisper idea was the “proof of concept” piece that I edited first and used to send to WAPJ and to Robin Hood Radio which led to their acceptance of our program. It’s a wonderful romp through a story line that’s reminiscent of the pulp hero stories that

The interaction between Lana Peck (as Twomley) and Kurt Boucher (as Ox) especially when dealing with Josh Newey’s Whiddlebury makes me laugh every time I listen to it.

This is the last episode from the first recording session. It was a wonderful evening but we found in future recordings that it would be best to have a Sunday afternoon recording session moving forward and only rehearsals at night.

We recorded Robert C Fullerton’s musical performance separately and it was an honor to have as our guest Leslie Elias of the Grumbling Gryphons come to the studio for an interview.

Every character in a passenger story has the opportunity to come back for an encore episode but The Grey Whisper especially is intended to be a recurring character and I’m already well under way in writing The Grey Whisper Returns which may be Episode 10.