Nutmeg Junction had a wonderful opportunity to visit and perform on Nerd Talk, a cable program hosted by Kurt Boucher, Michael Illian, Catarina Quinonez, Lana Peck and Rich Cyr.  We were given a full hour and I wrote some scripts specifically for the show and there were some scripts that would be perfect for the show that we had just recently performed.

The first sketch Dracula and the Dentist I wrote almost immediately after knowing we would be on Nerd Talk and would feature Rich Cyr, Michael Illian and Catarina Quinonez. What I enjoyed about the concept was that normally a sketch like that would make Dracula the big comedy figure, the unusual element in a regular otherwise mundane situation but it made be laugh to flip the script and have Dracula essentially act as the straight-man in the bit.

Now in the live show we  performed “Toy Feasors” but we had recently performed that on the Tort Law Episode which is only 2 episodes ago so I’ll save sharing the recording of the live performance for a later episode.

So the second story in this episode is actually “No Offense”.  We had just recorded it in studio but there was a wonderful energy in this live rendition of it so I chose to share the recording of the live performance of No Offense here. The script evolved. I knew I wanted Rich Cyr to reprise his role of Edgar Allan Poe  (last year we had a Serendip-History story with Poe meeting Washington Irving-as far as we know they never met in person but they did correspond in writing) and I knew we could do something with The Raven again.   The editor of Grahams Magazine was indeed a man by the name of George Rex Graham and there was an actor in that time period named Stuart Robson. Grahams Magazine did initially employ Poe, and did publish Murders in the Rue Morgue and did hire a replacement for Poe named Rufus Griswold who hated Poe and who did not publish The Raven so all of that is somewhat accurate (of course our take on the subject is completely fictional).

In the live show we did the Robin Hood sketch which was perfect for a large ensemble cast but again, we just aired the studio version of that story recently, in fact it was last episode, so I’ll save that live edition for a later episode. 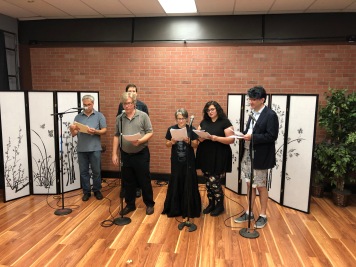 So our third story was Tales of Intrigue. Phil Hall and Kurt Boucher are Rutledge and Haldemann: they represent the thin grey line separating society from anarchy while wearing pressed grey suits and shined shoes but using the clever disguise of bandannas to infiltrate an unusual world, in this case, the world of Trick or Treaters.

The final story from the live show was a Professor A unique sci-fi story written specifically for that broadcast and I love the story but I’m saving that for next week when we air two Professor A stories, the studio recording of the Simulacrum and the live Nerd Talk recording of “The Time’s Arrow Trap”.

So given the time on the episode I wanted to share a very short story called The Choice featuring myself as a Bogart type character and Laurel Briggs as a Mary Astor type character.

Dracula and the Dentist:

Tales of Intrigue: Trick or Treason