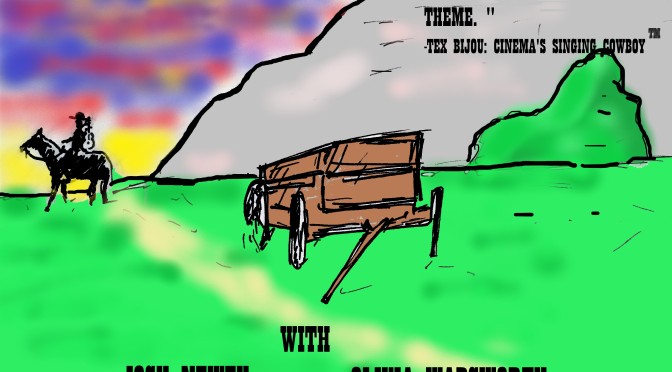 “Tex Bijou: Cinema’s Singing Cowboy ™” was one of the original character creations that the came straight from the idea of doing a new “golden age of radio” style program in the first place. Westerns have a long and storied history in entertainment in all forms (novels, comic books, radio, tv and film) and the “singing cowboy” idea was a special form of that sort of hero. The two singing cowboys I always enjoyed were Gene Autry and Roy Rogers.  Oh, the “tm” portion pf Tex Bijou: Cinema’s Singing Cowboy ™ is part of the joke of the character and show, we’re not trying to be precious here!

Robert C. Fullerton, a founding cast member of Nutmeg Junction, is not only a voice actor but is our primary musician on the show. He created the Nutmeg Junction theme, the Mr. JT theme and numerous other songs already on the show. So I thought it would be fun for his primary character to portray “Tex Bijou: Cinema’s Singing Cowboy (TM)” and the wanted Tex to be a surprising creation as the story unfolded.  I wrote the Mise En Scene lyrics and he put those lyrics to music and improvised the theme to Tex Bijou. I added my whistling to that number!

As Sheriff and Deputy, the team of Kurt Boucher and Jandi Hanna was a joyous discovery and their characters eventual contempt of the Hollywood status of the main character grows funnier with every listen.

Jess and Jesse are the PAs portrayed by Olivia Wadsworth and Josh Newey.  They have to carry the show’s premise and I enjoy how they succeeded in that task. Both Josh and Olivia brought nuances to the roles that improved the words on the page. For instance every time the Deputy wishes to chastise the PAs, Josh Newey’s Jesse always redirects back to the Sheriff. As memory serves that was not an intentional aspect of the script but Josh brought it to life and it works very well.

This episode was Olivia’s first real foray into our world of audio theater (she did play a minor role in the Professor episode with two lines but this was the first script that really showcased her talent). Her portrayal of Jess as an efficient PA who provides the list of options for the star of the show is a lot of fun! 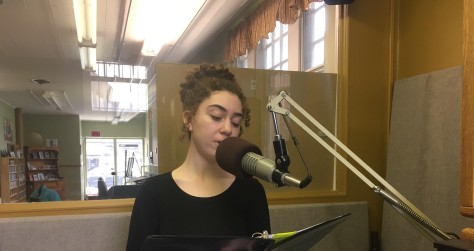 And what can I say about Joel Benson! Joel had a few lines (just like Olivia had a few lines her first time out with us) but he sold every one of them! What makes this character work is how completely opposite his voice is to Tex Bijou’s (and Joel plays his stunt double.  With Joel’s sense of humor, we’re lucky we have him in a subsequent episode (The Grey Whisper Returns) and we’ll have him come back for more! Joel has a radio show on WAPJ called “Unhinged” which airs Thursdays noon to 2pm.

Episode 8 in recording and release