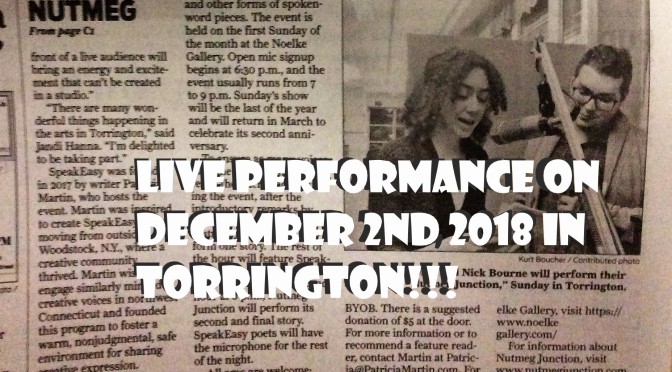 Dreams become goals when you write them down, chart the course and take the first steps.  On the very first night of recording at WAPJ in January of this year, the team took a few moments around the large table and the vision for the show was outlined with both short term and long term goals. Among the goals for Nutmeg Junction was to perform a live show by the end of the year. We had initially considered doing a large theatrical experience within one of the venerated theaters in the area but as our program evolved we decided to focus our energy exclusively on the burgeoning show and consider a live event for some time in 2019. 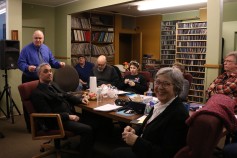 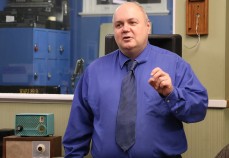 If one is persistent and focused, the goals do not drop away, they are worked towards with enthusiasm and we found opportunities to do live events in February, April in June of 2019. More on those events later but the key aspect of this idea was that the goal was not eliminated, merely edited so that we could achieve success in that area in the right way.

Let me take you now to early September.  I was sitting at the studio on 40 Water Street preparing for one show or another when I shared a few moments with John Ramsey, General Manager of the station and CT Broadcasting Hall of Fame Member. John wanted to talk to me about recording on behalf of the station an event that was to occur across the street at the Noelke Gallery, an event called SpeakEasy.  Founded and hosted by writer Patricia Martin, this event features Spoken Word “open mic” opportunities for creative expression and is held the first Sunday of every month.  John thought SpeakEasy would make a wonderful radio program if we could record and preserve the poetry shared at the SpeakEasy so long as the participants were willing and it did not impinge upon their creative spirit or foster a self-censorship structure for the speakers. 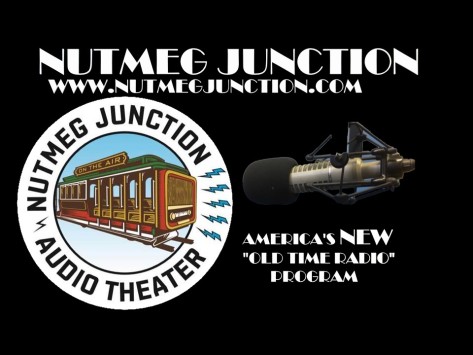 As luck would have it, not only was I aware of the event but just prior to that conversation Patricia Martin. who was guest voice actor on OUR show (see Episode 14: Battle of Elsenorift), invited Nutmeg Junction to be the featured guests for the December 2nd SpeakEasy last show of the year.  In most cases the spoken words shared are poetry but not always and Nutmeg Junction after all is spoken word, it is audio theater. Further, some of the performers at SpeakEasy like Jack Sheedy (episode 11: Harriet Holmes and the Search for the Lost Episode Part One) and David Robinson (Professor series as “Bear” in Episodes 17, 22, 23 and 24 plus non-Bear roles in episodes like HP Lovecraft in Episode 28) performed on Nutmeg Junction so this opportunity was an opportunity we eagerly accepted.

The October and November SpeakEasys I attended  and recorded were engaging and lively and we have the recordings now safely archived and ready for editing. SpeakEasy is to take time off in January and February so we expect to use that time to present the SpeakEasy radio show and get the word out about the 2019 SpeakEasy events. 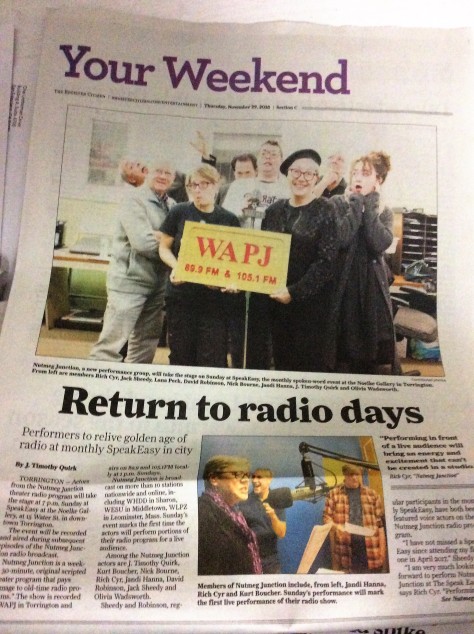 For our participation in the show I asked team members of the original cast who could make it to the event and some cast members couldn’t attend mainly because they’re involved in other shows or events! But Rich, Kurt, Jandi, Olivia and newcomer Nick  along with Jack and David would be there and so I set about writing a script for Rich, Kurt and Jandi called “Thoughts Before Breakfast”. Then I wrote the script for Lana and Olivia with Nick, Jack and David called “Inspector Trompe-Loeil” but Lana was cast in a Warner Stage production which has rehearsal that night so  Jandi took over the Inspector role.  In the last week I wrote a Space Sentries script that may be the funniest script I’ve written to date. That may bump “Thoughts” depending on time.

Which brings us to today. For December 2nd, we will perform some material live in front of an audience. This was the actual goal in January and when this occurs we will have achieved and exceeded our 2018 goals for the show!

We are excited about this opportunity and brings us to a new level for the show. We will learn from this event and bring those lessons to our first full production which will occur February 16th, 2018 at Trinity Episcopal Church where we intend to have the equivalent of 3 episodes recorded.
Then to celebrate our first full year, in April we will hold a gala anniversary event at the Childrens Theater on Main in Falls Village, Connecticut. 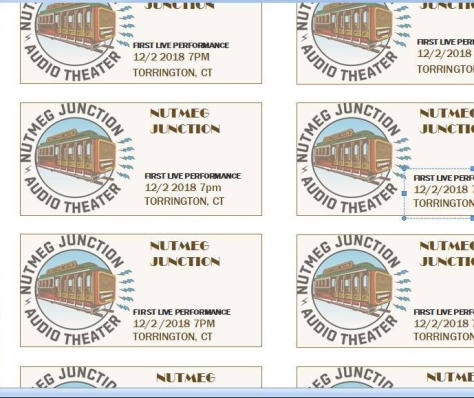 Finally, although probably not finally, in late June we intend to perform at the Strand Theater in Seymour, Connecticut.

These live events will give all of our actors the opportunity to shine and to receive feedback from a live audience.

As a token to those in attendance, I have created “Junction Cards” which will sort of take the place of a “ticket” and will be collectible and there will be a different card for each live event.

We hope you enjoy Nutmeg Junction: LIVE and if you’re in the area, I hope you are able to attend one of the live performances including, perhaps, the one tonight! Yes, dreams become goals when you write them down, chart the course and take the first steps. They form an even more enjoyable reality when they are shared with like-minded travelers who take the journey together.

Here’s a write up of the show: